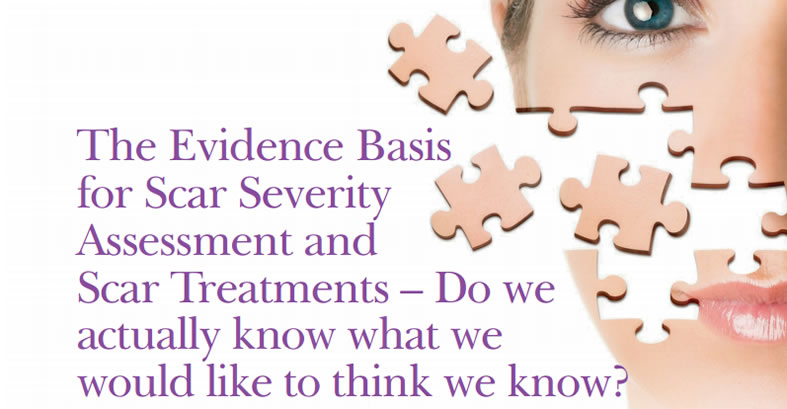 Wounding is not a natural process and the biological processes that deal with wounds are not regarded as normal either. Therefore, it is not valid to describe any scar as “normal”. This would seem to be readily understandable, even axiomatic. However the lack of firm concepts about what scars should look like or behave
like (what should be regarded as a “normal scar”), underpins both doctors’ difficulty in assessing scars and variability in those assessments. In addition, the visible appearance of a scar is only one component of what may be a highly-complex set of symptoms and physical problems including: pain; tenderness; itch; altered sensation; reduced ability to move; psychological or psychiatric issues.

When is a scar a bad scar? This question is one that is pondered frequently by specialists taking instruction in medicolegal cases which, on the face of it, may seem to be easily answered in an understandable way. However attempts to evaluate scars for diagnosis and severity are fraught and highly-susceptible to subjective influences. Efforts to achieve objectivity in scar assessments have led to the development of many types of devices to measure certain physical attributes of skin [1]. Whilst these devices provide numeric data which can be used for comparison of outcomes, the techniques require training; they are highly userdependent and liable to considerable variation in results when used by individuals of different experience. As a result, devices have not been adopted generally and largely remain research tools.

In the absence of an ideal scarometer, various clinical methods to rate scars have been developed. The number of different scar scoring systems available should serve as a cautionary guide to their fallibility. The most widely-recognised and extensively-published scar scores are described below. It should be remembered that although these scores may prove useful in assessing and comparing outcomes, they are highly-flawed as diagnostic tools and should not be
considered as a means of diagnosis of hypertrophic or keloid scarring.

This is a long-established means of scar evaluation [2,3], which uses an assessment of four features of scars: Vascularity; height & thickness; pliability; and colour. Patient perceptions are not assessed in this scoring system. Some evidence is available showingmoderate or good correlation between the VSS score and objective techniques to assess cutaneous physical characteristics. The VSS remains applicable for evaluation of therapy and surgical outcomes in burns, but is yet to be adopted in general clinical use.

Patient and Observer Scar Assessment Scale (POSAS) This scale overcomes some criticisms of the VSS, in that it combines assessments of several physical features by both doctor (the observer) and patient, together with subjective, patient assessments [4]. The POSAS is still the only widely-recognised scale that
considers subjective symptoms, but lacks information on function and quality of life [5]. The POSAS scale is subject to some criticism. Analysis has shown that the observer's opinion and patient's opinion may be primarily influenced by different components of the assessment scheme [6]. Anecdotally, researchers report suspicion that many patients will tend to underestimate the severity of their scars, when presented with the POSAS scale. Furthermore, the scale is relatively cumbersome, requiring about 10 minutes to complete and patients with multiple scars, or scarring over a large area, may require multiple POSAS scales to be completed at each assessment.

Proposed in 1998, this scale was an attempt to introduce a more quantitative element into scar assessment [7]. It differs from the POSAS and VSS in that it includes an additional 1-10 overall score and details on race, ethnic background, history, cause, symptoms, treatments, and responses. These additional data have been shown to improve the degree of agreement in scores between different clinical observers [8]. However, likely due to the time involved in filling this more cumbersome questionnaire, it has not been adopted in clinical practice. A further important caveat should be highlighted, in that this score was intended to be a means of comparing scars and measuring improvements or deterioration over time. It is not and could not be a means of diagnosis of hypertrophic or keloid scars.

What treatment or treatments are necessary to improve this person's scars?

The answer to this question will vary tremendously, depending upon the specialist of whom it is asked. Treatment options for scars were discussed recently in this journal, by Shokrollahi [9], who described 15 different treatment types. This list itself was not exhaustive. Additional scar treatments include intralesional cryotherapy and electrochemotherapy as well as other mainly research-based treatments still under evaluation. However, as is the case with scar scoring systems, the fact that so many different types of treatment available should be a reasonably good indication that no treatment is fully effective in all patients.

In determining which treatment to use for any particular condition, doctors often rely upon national or international guidelines, which in turn tend to be based upon systematic reviews of numbers of randomised controlled studies, involving large numbers of patients, often tens of thousands. The quality of evidence on which treatment decisions are made is often quoted as a Level of Evidence. The Oxford (UK) Centre for Evidence-Based Medicine (CEBM) [10] developed this scheme for ranking the available evidence for treatments, giving levels of evidence for statements regarding treatment effects and outcomes. CEBM levels of evidence

2a: Systematic reviews of cohort studies

3a: Systematic review of case-control studies

5: Expert opinion without critical appraisal, or based on physiology or first principles

While occasional published evidence on scar treatments may approach Level 2b, the vast majority of published evidence sits in and around Level 4. This
compares very unfavourably when compared to treatments of medical conditions like hypertension or heart disease, which will rely heavily upon evidence of levels 1 and 2.

Who do we believe?

Expert witness testimony is a mixture of statements of evidence-based fact and statements based upon the individual expert’s personal experience. With respect
to scarring, both foundations are valid. In some respects they have to be as the bulk of clinical consensus in scar assessments and treatments relies upon experience; whenever an objective evidence base is present, this is mostly of a fairly low level.

impressions and casts) may be required, in addition to scar outcome scores, in order to truly provide “objective” data. The result of this is that, to some extent,
statements about scar severity and outcomes will necessarily involve subjectivity on the part of medical expert witnesses.

Good quality, prospectively-recruited, adequatelyblinded, randomised controlled clinical trials are sparse in scar and wound management, as are systematic reviews. As a result, the leading international guidelines on scar management were derived from consensus groups, rather than “pure” scientific evaluation [11,12]. The fact that these guidelines, published in 2002, have never satisfactorily been superseded is strong evidence of lack of: agreement; understanding and even motivation among doctors who assess and treat scars across the world.

Medical experts try to assist courts by providing impartial assessment of scars and applying their knowledge and experience to provide opinion on the best way to treat scars that are problematic. That knowledge and experience is the foundation of a doctor's entitlement to be called an "expert"[13]. However, given current knowledge and evidence, medical experts may be unable to provide advice regarding prognosis, severity and treatment, with satisfactory degrees of certainty. This renders more significant, a specialist's personal clinical experience. Although it may seem unsatisfactory to base conclusions about prognosis or best treatments upon personal experience rather than systematic reviews and randomised controlled trials, the unpalatable truth is that, with respect to scars, the evidence base does not support provision of opinion based solely upon published data.

Give evidence-based opinion on prognosis and final outcome.

International Guidelines are a consensus statement only.

Low levels of evidence for all treatments.

What is meant by "a hypertrpohic scar"?

What is meant by "a bad scar"?

Why commit the patient to a series of expensive and probably ineffective steroid injections?

Why jump to recommend that expensive and unproven treatment?

Upon what evidence base do you give that prognosis?

Writing Reports For Court. Some Guidance For The Aspiring Expert Witness.

What is Forensic Gait Analysis?

First Do No Harm: Complications and Complaints will Change Pelvic Floor Surgery Using Mesh Implants in 2015

The Advocate and the Expert in a Testamentary Capacity Claim

Developing Forensic Practitioners of the Future

Expert Engineers Plus? How Collaboration can Add Value

The Expert Witness in Adjudication

Digital Forensics and the Futuristic Scene-of-Crime

Alarming Cycle of Head Injury in the UK

“I’m Not Dead Yet!” Forensic Pathology in the Living.

Quantifying the Financial Effects of Termination

In Case You Wondered… How Case Law Informs Practice

Competition for Commercial Disputes Around the World

A Salutary Warning to the Expert

Art Buyer sues Christie’s for failing to do its homework

Lords inquiry says Forensic Science is Broken: Here’s How We Can Start to Fix it

Artifical DNA can Control Release of Active Ingredients from Drugs

Interim Injunctions - The Dangers of Being Trigger-happy